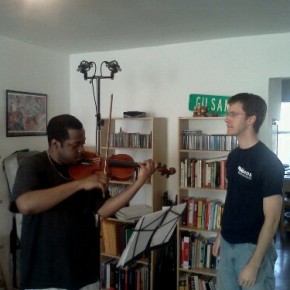 We’re recording on Saturday. Sean and I are rehearsing every couple of days, and putting the finishing touches on his performance. If I could focus only on that, this would be easy. But we’ve got to sort out a film crew that seems to get new members every day (we’re up to five now). We’ve got film gear to rent, pick-ups to schedule, credit card authorizations, etc. etc.; there’s a lot to do.

In the last week or so we’ve been able to really focus on this stuff. A lot of it we would have done before, but our director Alan has been a bit busy working on this project. Given the number of former Presidents of the United States involved (and I don’t mean members of the band, I mean actual commanders-in-chief), I think we can allow that. 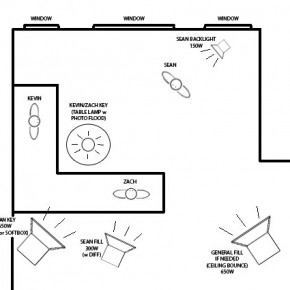 Last week Zach, Sean and I tested out mic set-ups. Do we want the mics behind, where they’re easier to keep out of the cameras’ way, or do we want them in front, where they sound just a bit better? We’re keeping the mics in front – make the best recording we can and shoot around that is the rule. That’s when I took the photo up there. This diagram down here is something Alan made to help plan the shoot. It shows where people will sit and where the lights will go. Alan’s revising it after our visit to Gramps and Maxine’s place yesterday. That was our final production meeting, getting both camera operators a good look at the space, and finishing up our plans.

This week will be full of last minute rehearsals, revisions, and weird logistical challenges. And stress, can’t forget the stress.