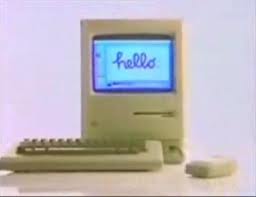 I’ve been meaning to write about this for a while. The tributes to Steve Jobs, and this recent blog post from Ian Moss on usability studies in arts programming seem like a good jumping off point.

The thing I’ve always loved about Apple products, and the thing I’ve sometimes found irritating about Apple products, is that they’re so damned usable. The amount of processor time on the original Macintosh devoted to the graphic user interface alone makes the point. At the time, everyone thought this was an insane misappropriation of computing power. It turned out that it was a great decision, and the industry followed suit, but slowly and without the same usability standards – hence the endless jokes in the 90s about Bill Gates ruining productivity. Over and over again, Apple placed what looked like insanely huge bets on usability, and over and over again, everyone else followed behind, but without the same standards, and slightly later. Now interaction design and usability studies are growing fields filled with creative people making money from their psychology and sociology degrees by working in tech. That’s great, but I still don’t know what an overinvestment in usability looks like. I’ve never seen someone make something so usable and intuitive that it failed. Not in tech, not in the arts. Never.

Which brings me to Ian Moss’s post for ARTSblog. He wrote about usability studies that Fractured Atlas conducted as part of their software development process (p.s., they’re building cool stuff. Go have a look.) in connection with arts programming. If you’re a theater, Ian says, your standards for intuitive use should be as high as those for a piece of software, or for an iPhone. I couldn’t possibly agree more. What’s been on my mind though is how this impacts not arts programming but art making itself.

We tend to let great artists do whatever they want, whenever possible, in the belief that they will produce things that speak to people, move them, and improve their lives. Historically, this has been very much a 1-person project. The artist uses their talent and inspiration, and if it works right, we all love it and praise them forever. In part that’s because brilliant artists are in fact special, and talent is by definition impossible to quantify.

But I think that in part it’s also a matter of habit. We didn’t bring other people into the process because we didn’t know how, because we really just couldn’t do it. Some artists have always sought feedback from friends, collaborators, teachers, and even workshop audiences. These groups have all been very clearly separated and served very distinct functions. Maybe your closest collaborator can convince to fully restructure act 2, but your workshop audience is probably only going to teach you about casting choices, or prove to you that you were right, that song in the third scene really isn’t working.

Then there are the critics, the purchasing audience members, financial supporters and other groups and individuals with firmly established rules for how much they get to influence what it is you’re actually doing with your art.

We have analytics data for websites, heatmaps for youtube videos, comment threads, demographic reports, kickstarter campaigns, and twitter hashtags – for a start. New tools are being brought into existence every day. They let us know in detail, if we pay attention, exactly what the audience is thinking and saying, and how much and when they are buying. This information is the lifeblood of marketers, obviously, but if artists themselves still think they’re above doing this analysis, they’ll never understand whether or not their art actually works.

You want to know whether that song in act 2 is catchy? Put it up on Youtube, push it as hard as you can for a couple hours and see what happens. See that heatmap in the insight panel? See where it falls off, when people stop watching? That’s where you’re losing the audience. That’s where you need to tighten it up. It’s cheaper than a workshop, easier than scratching your head for a week, and probably faster, too.

This particular technique can’t answer very complex questions. Thank goodness it’s only a start. Even so, it can be a huge help. There’s so much more we can learn how to do along the same lines.

When this process is finished, and the communications technology explosion is basically complete (maybe around 2100? I don’t think I’m talking about the Singularity, but I might be…) we won’t have neat little boundaries keeping our audience separate from our critics and our collaborators. Everyone will serve every function for every artist to varying degrees. We’ll have a truly gradient audience.

Making It Work For Art

So how do we make all this work for us right now? The technology is still emerging, and so are the techniques for using it. When piano makers experienced an explosion in their technology in the late 18th and early 19th centuries it took composers like Beethoven to experiment with the new sounds and establish the techniques to deal with them. The same thing happened with electronic music in the middle of the 20th century. We’re artists, we have to experiment. But this time we’re experimenting with communication, which is a little unusual for us.

We need to figure out how to use new forms of communication, how to use other people’s brains, basically, to refine our artistic decisions. As we continue experimenting with this (They Might Be Giants got it started in the 1980s with Dial-a-song), we need all the help we can get. We need people who know how to do similar things in other contexts.

That’s where usability studies and Apple come in. There’s a lot of money in that field, and a lot of smart people. A lot of them work at Apple, more work at Facebook. They’re not wasting their time either, they’re figuring out how to support complex decisions with a lot of interrelated dimensions including how other people feel about the thing you’re making. Sound familiar? The problems usability people have to help solve are very similar to the decisions we face when we make art. We should learn as much as we can from the usability people. They’re way ahead on this, and all we need to do is ask.

What I Don’t Mean

It might sound like I’m saying we should have focus groups to decide every little thing. Or like I think artists need to stop being creative and start being market researchers. I think nothing of the kind. This stuff is useful to the extent that it’s faster than the old way and helps us make better decisions when we ask for help. We’ve still got to write just as hard, and we still keep the responsibility for being brilliant and creative. Before the usability people can test a new Apple product, there has to be a prototype. We’re just getting another tool, and frankly a pretty awesome one, to help us do that stuff better.

It’s not about focus groups and surveys, it’s about making your next work of art as seemingly magical as an iPhone.