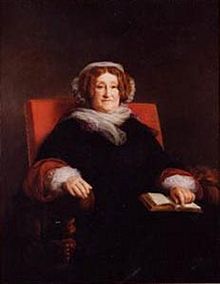 It happened with champagne in the early 19th century. It used to be just wine, and the bubbles were a both much bigger and a bad thing. The English used to drink it mixed with brandy (still a nice idea, actually). But the idea that it was special, and to be drunk at times of celebration, came along with some changes in production that made the bubbles smaller and prettier and into a bit of an asset. Veuve Clicquot had a lot to do with it. The veuve, or widow, in question was a fairly badass businesswoman and marketer. That’s her picture there.

It happened with diamonds in the 1950s. There’s a cartel that controls that world’s relatively small supply of diamonds. There are mines, blood, mercenaries, protection rackets, very few companies all working together and a LOT of exploitation involved. It’s sketchy and not at all a good thing. These guys got together and decided that diamonds shouldn’t be just another gemstone. So they spent a huge amount of money on mass market advertising (this is back when that was both the only game in town and hugely effective) and managed to turn diamonds into the thing that celebrates weddings, the rarest and most coveted gemstone around. They permanently repriced the diamond.

Then it happened again with olive oil in the 1980s. Before then it was just another oil and health nuts used oils from seeds and regular nuts. The idea that it should be eaten a lot in the richer countries because it’s healthy (at least a hair moreso than other oils) and completely delicious didn’t take hold until the 80s. Sure, Julia Child was cooking with the finest olive oil on television in the 60s, but in the 1980s the market exploded and there was in fact a concerted effort on behalf of some very clever olive oil people to do this. Food writers and chefs were worked individually, and professionally. And then they became olive oil evangelists. Instead of being a luxury it became a staple.

Watching stuff happen on the internet makes me wonder if it’s happening again with creativity. With Kickstarter, it’s becoming more and more part of the culture to give some money publicly to an artist. With speedy social sharing the competition to have been the first to discover new cool things makes creative product more valuable (be it a cat video or a piece of art or a write-up of a brilliant new discovery). And with the rise of hard computing, automation, and search, creativity is becoming a more and more crucial part of more and more jobs in every field.

The next logical question is who’s going to run the cunning centrally directed campaign that was involved in the other three examples, or who’s running it already. I don’t know that anyone is, and with the internet I’m not sure anyone has to. But if someone is secretly doing this is, and that someone is reading this post, and that someone happens to have a job opening, I think someone can find the comments box…

I don’t think this is a process that will continue to the glorious future of paying artists properly for their work, but it might be able to fight the longstanding view that “the arts” broadly construed, are a luxury, instead of as crucial to the health of a society as any other quality of life improvement, like green space or public transit or high speed internet.

I wonder what it says that the three examples I picked are all luxury goods (though olive oil is trying hard and doing well at leaving that category). They were just the first I could think of, but I suppose it’s harder to fundamentally change the price of wood, steel, or semiconductors through a tectonic shift in how a society views them…