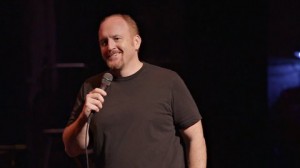 You’ve probably already heard about this. Hilarious and vulgar-but-never-mean comedian Louis CK directed, edited, and published his own stand-up special without a big production company. Sold it just online. $5, no restrictions. Much cheaper than the $20 region-restricted DVD a big publisher would have released. We’re three days from release now and he’s already made a decent profit.

This was an experiment in a new arts and entertainment economy, and by any measure it was a success. Go read Louis’ own blog post from last night about the economics so far. Well done. One of the many responses to that post came from Cindy Au, Kickstarter community guru and tumblr-er and tweeter of delightful geeky things. Something she said got me thinking:

I hope Hollywood studios and television networks and entertainment conglomerates are paying attention to this. Because if they’re smart, they’ll scramble to figure out how to reinvent themselves in a world where content is decentralized and people go directly to those they trust for news, entertainment, and more.

People say things like this a lot. If the record industry were smart, if the book publishers were smart, if the MPAA and RIAA would just adapt to the new world instead of trying to legislate the perpetuation of the old one, then things would be better (please defeat SOPA by the way, if you’re for it you misunderstand the world, the bill, or morality).

But we don’t tend to talk through what “adapting to the new world” or “reinventing yourself” would look like. It’s a really hard problem, but as usual I’d like to at least take a whack at suggesting a solution.

I don’t know enough about big studios to say what they should actually change about themselves, so let’s take a different question. Louis CK turned down traditional DVD publishing, the only companies available, and did the whole thing himself. What if there were a company in between those two options? What would that company be like?

We’ve got to, for the moment, pretend that Louis CK isn’t, on top of being a great comedian, a savvy businessman and a talented filmmaker who directs and edits his own sitcom. For people like that, running it yourself is always going to be a great option. Philip Glass is another great example of someone who built his own cottage industry rather than use existing big companies and lose control.

But in twenty years, there are going to be a lot of creative people making wonderful things who don’t have the old-economy-big-publisher option (those companies will just plain not be there) and don’t have or want the extra-curricular skills to run their own productions. All artists will have to be more entrepreneurial, but some brilliant artists just don’t do that and never will. The market will adapt to them. They’re going to need production companies of some kind, and those companies are going to start existing in the next few years.

What are those companies going to be?

First off, they’re going to be smaller, project-based, and incredibly flexible. Their employees are going to be multi-talented generalists combining technical skills in film making, web publishing and marketing with stunningly flexible time and project management and incredible collaborative skills. Everyone will have their specialty, and the right mix of people will be cued in project by project, but a lot of the jobs now done my multiple people will be done by a single person.

What if, instead of having a full time staff or a loose network of freelancers, you had a permanent roster of people, paid mostly by project, but guaranteed a very low base salary (or just health insurance) independent of the workload, in exchange for always working on the company’s projects? You could hire from your standing staff for each project, pad out the list with freelancers as needed, and try out any permanent “staffer” as a freelancer on one project before hiring them properly. Maybe this is an unworkable compromise, but I like to think that there’s a way to bridge the gap between the soon-to-be-prohibitively-expensive permanent staff and the far-too-fly-by-night approach of all-freelancers-all-the-time.

Right now production companies buy copyrights and IP from the artists. That’s going to have to stop. Artists are just not going to accept giving that up anymore. But one of the biggest attractions of the producing business is the potentially unlimited upside from owning the rights to a wild hit that becomes a key cultural icon. Without that, how do you justify the frankly very high failure rate? On the other side of the production business right now is what Louis CK did: straight work for hire. That’s not a great way to build an industry, and the most talented producers and technicians won’t deal with that.

Again, I think there has to be a middle way. In this case I actually think there are about a dozen middle ways depending on the situation. Maybe the artist keeps the IP and promises a share of the revenue on top of a fee to the producer. Maybe the producer takes more risk up front and gets more upside later. The way these deals get put together will be strongly influenced by the start-up world, and the way venture capital functions. And some of the same advice that applies to founders with a great product will apply to artists with a great piece.

You still need a Seth Godin style “permission asset” or “tribe” to make all this work. By which I mean a mailing list, fans, an audience who cares about you. You need to generate it yourself. Mission Paradox had a great post recently on how three things that used to be connected for artists aren’t anymore:

You used to get permission to write the book together with an advance and a promise of an audience from the publishing company. Now you write it yourself on spec, drum up the audience yourself, and then pray to god someone’s willing to pay you. More people get a smaller slice of the (possibly smaller?) pie, but they do get more control.

Your relationship to your audience needs to change

In the old model, the audience came from the publisher, and they were mostly just faceless customers. Now they’re a lot more than that. There’s a magical thing that happens when you’re leading a group of committed people. You have this idea, and it’s good, but it’s just yours. Then you work with people, and the idea becomes theirs too. They work on it, they think about it, and they make it a whole lot better and a whole lot more exciting. This idea lives in the minds of all these people, is part of their lives, makes them a little bit happier. That’s the greatest feeling in the world for me. It’s why I do what I do. Here’s the quote from my idol, the great Kermit the Frog himself:

I’ve got a dream too, but it’s about singing and dancing and making people happy. That’s the kind of dream that gets better the more people you share it with.

That feeling used to come only from small groups of close collaborators. The bigger the group (especially big companies) the less this works. Revolutions in communications technology mean both that bigger jobs can be done by smaller groups and that bigger groups can have experiences that used to be restricted only to tiny groups of people.

This is a new world. If you’re an artist, and you don’t let your audience take over and improve your ideas (without just running a popularity contest), then you’re doing it wrong.

Predicting the future is fun!

But obviously I’m making it up. So I ask you, what am I missing? What assumptions have I blown? What economic forces have I missed? Have I assumed stuff about audience behavior that doesn’t track? Have I overstated the threat to traditional arts economic models? Are there other tech developments coming down the pike that completely explode this analysis? If all this works okay for individual artists and smaller projects, what does this economic model do to to $100 million summer blockbusters?

Alexander Graham Bell first thought the telephone was going to be a broadcast device (as I recently learned from Paul Adams), so I wouldn’t be surprised if all of this turned out to be completely wrong.

I’d be bummed, but not that surprised.