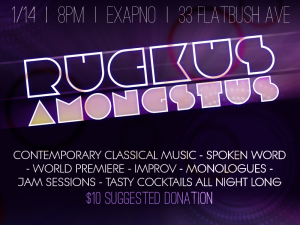 This is going to be a wonderfully mad show. I’ve been looking forward to the day when the team behind No Signal got back together with some new friends in New York and put on shows again, and that time is finally upon us.

This Saturday, 8 PM, at the Exapno New Music Community Center, the curtain goes up. But we don’t have a curtain, since this is an extremely DIY, seat-of-your-pants, make-it-up-as-we-go-along kind of show. But we’ll start at 8. Or maybe a little later if people are having too much fun enjoying the cocktails.

Check out Exapno’s website if you need help getting there, and feel free to circulate the concert flyer as far and wide as you like. Doesn’t it make us look like an awesome underground dance club? Thanks, Victoria!

Check out the full program below for the astonishing range of stuff that will be happening this Saturday. As for my own music, Rachel Gawell is going to perform The Seafarer, which I wrote for her way back in the day, and which premiered on one of the very first No Signal shows.

We’re also going to be doing some improvisation with Mike Compitello on marimba and miming actors for Summer’s Twilight. At the heart of that piece is the interaction between the four lovers, played by singing actors, and the two fairies, who speak all their lines through the marimba or the cello. As I write the different sections, I need to know how the actors and the instrumentalists can communicate, how much they understand, how they control each other. I also need to know how much of that interaction is clear to the audience, so that I actually get the laughs that I want instead of just playing some music and doing some blocking and no one understanding it.

So this is research, but it’s also comedy improvisation. That’s why I’m quite so glad to have Mike Compitello, Casey Middaugh and Rose Ginsberg on hand. We’re going to learn a lot about Summer’s Twilight, and we’re going to make you laugh while we do it.

The best way to RSVP is through the Facebook event. If you’re curious about who’s playing what or what any of this stuff is, just let me know in comments and I’ll tell you all about it – especially the delicious cocktails we’re creating for the evening, or your choice of youtube videos for us to use in improvising film scores….

Here’s our program, as it currently appears on the facebook event page.

Come out to Exapno for a VERY unusual evening.

We’ve got virtuoso performances of contemporary classics alongside pieces by composers right there in the room.

We’ve got a Bad Plus cover, spoken word, V-Day, physical improvisations, haunting female voices, and a folk/rock band jamming to close out the night.

PLUS: We’ve got Fantastic and Original Cocktails!
PLUS: We’ll play YOUR favorite YouTube videos, and IMPROVISE A SCORE!
…..Start submitting now in comments…..

And if you can’t make it in person, we’ll put as much of the show as we can up on YouTube in the weeks after the show so you can catch up on all the action!

Textual Healing
Monologue from “A Memory, a Monologue, a Rant, and a Prayer”
The Seafarer by Kevin Clark, translation by Burton Raffel
My pain by Edward Thomas-Herrera