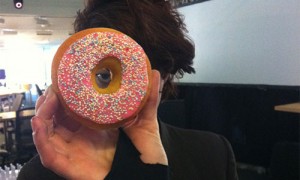 So….. Facebook’s stock is dropping a bit. Ignoring the major explanations: a bank that didn’t underprice the stock to take piles of money off of a tech company, a big honking tech bubble, etc., there’s something else going on.

We all have this basic feeling that Facebook is actually hugely important and hugely valuable. We all stare at it a bunch and it’s part of a ton of different things we do every day. And we all scratch our heads a little when asked how much money it’s worth, or how it could possibly profit enough through advertising to merit that gargantuan valuation.

A part of the problem is that a lot of people think about social capital as valuable to the extent that you can turn it into regular capital. The userbase is worthwhile because you can turn it into advertising revenue, or subscriptions, or recommendations to others to buy your product. And that’s not quite right. It’s true, you can totally monetize social capital in certain situations (Hi Kickstarter! Hi Amanda Palmer!), and it’s a HELL of a lot easier to monetize social capital than it is to socialize regular capital (be my friend! I’ll pay you! …. not so much), but it’s a mistake to understand social capital only in terms of its cash value.

Social capital is SO not money

There are a lot of reasons that’s a mistake. First, when you spend cash, it’s gone. But when you monetize social capital, the social capital is still there. Second, the whole idea of money is that it’s liquid and simple and fungible and any one dollar bill is indistinguishable from any other. Social capital is fuzzy, nuanced, illiquid in the extreme, and only actually does stuff that the people involved actually want to do in the first place (or nearly want to do).

That’s not the only reason there’s a disconnect between the value of Facebook in society and the value of the stock, but it’s part of it. Also, this explanation feels right. It helps put a solid idea beneath the truism that friends are worth more than money, and just cannot be valued in dollars. Valued? hugely. With a number? Never.

Before the internet, understanding social capital as a competing method to money for accomplishing complex, coordinated tasks wasn’t super necessary. There was a similar amount of social capital in existence, but it wasn’t nearly as easy to use it to directly accomplish stuff that you’d otherwise have to pay for. But now, it seems you can’t go a week without being given a new way to connect with people on a new platform that exists specifically to help you coordinate and solve problems – all without spending a dime. Well, mostly without spending a dime. Hi again, Kickstarter!