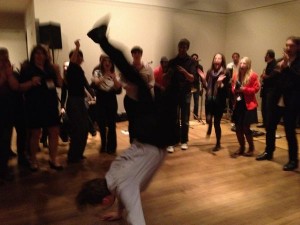 The National Arts Marketing Project conference was a blast. There were lots of smart people, the conference was very well organized, and I was upside down (photo credit: @lynnekingsley). It rocked.

I spoke with Sara Eileen Hames and Casey Middaugh about how arts organizations can use Kickstarter to rapidly prototype programming ideas while engaging communities. Doing this both engages communities, and gives you really really good data on the results of your experiments – backers are way more engaged than your average audience member.

A lot of the attendees at our panel were interested in some of the basics of how to run Kickstarter projects. To you, I recommend Kickstarter’s own school section (which is awesome) and my three-part blog series about running Kickstarter projects (part 1, part 2, part 3). All of that advice applies to this technique as well.

On the specific method of running programmatic experiments on Kickstarter, or any other crowdfunding platform (but seriously, you’d need a really good reason to use another crowdfunding platform), here’s the main thing: this is not about the funding. It’s about the crowd. You should run small projects this way, maybe in the range of one to five thousand dollars. That’s not going to make a significant dent in your annual budget, and if you really needed to find it in your annual budget, you probably could. After all, you’re an arts marketer with a full-time job (or at least the people in the room mostly were).

There will probably be a few dozen backers of whatever project you’re running, and that’s honestly too few people to survey. Don’t do statistics on survey responses from that few people. It’s not helpful.

But you won’t need to survey your backers. You’ll have spent the three or so months of your project’s development, fundraising, and execution with these people. You’ll know them on a first name basis and they’ll know you. You’ll have deep conversations about what your backers think about your experiment, and you’ll get their creativity, their intelligence, and their commitment to your organization’s growth and change. This will be awesome.

And they’ll have made their first donation to your organization. Ask your development department about repeat givers vs. new blood. It’s dramatic.

The takeaway: doing this will teach you a huge amount about how to work with your community, as well as about the next direction your organization should take in experimenting with its programming. And it’ll only take a few months.

It’s time to stop talking about how great innovation is or how frustrating your organizations are. It’s time to go try some stuff. This doesn’t take any other department’s money (because it’s self-financing), you can learn all the basics of crowdfunding online (including on my blog), and you’ll have nuanced experimental results and a newly engaged community in three months.

Give it a shot. I promise it’ll be awesome. And I’ll help if you ask nicely.