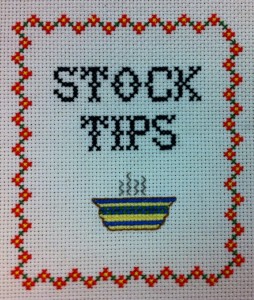 Rachel Fershleiser once said “If I die, tell the New York Times I liked soup.” Then she made this soup zine with her friend Ami Greko. I think the Times will be able to figure it out on their own. Most of the zine (which you should buy at Housingworks) is made up of recipes, drawings, and awesome manually cut and paste zine layout stuff. But I’m a huge food science and history nerd. So I wrote this:

When you want to make great beef stock, you might leave some meat on the bones, but what you’re really after is the connective tissue in the joints. You want it to dissolve into gelatin and make your stock all thick and sticky and delicious. And that takes a long time. Any meat that’s left at the end is soft and tender and falls apart right away.

But that’s not always how they did it. For a shockingly long time Europeans thought that if you boiled some meat a little bit, then the meat would get tough and gray because all the good stuff had already seeped into the water. Brillat-Savarin, who did much of his eating in pre-revolutionary France, thought that you could get the precious osmazome out of meat simply by leaving it in cold water, and that the “Extractable parts” came out through light boiling, but that gelatine was something else entirely.

This completely non-gelatinous beef stock was seen as halfway between medicine and food, and the 18th century French called it a restaurant, because it ‘restored’ your vital energy. In 1765 some shops in Paris started selling it on the street, and now we’ve got a whole industry named after shitty beef stock.

In the middle of the 19th century, the German chemist Justus von Liebig got very excited about the exact same substance. He proclaimed it “nitrogenous” (the “pro-biotic” of the day) and the very, very best substance for health and nutrition.

But our friend Liebig didn’t stop there. Beef was phenomenally expensive in Europe, and so cheap in South America that after slaughtering the cows to make leather, you’d just let the meat sit and rot. If only someone could come up with a way to get the “extractable parts” out of the meat, and preserve them for shipping to Europe…

Enter the Liebig Extract of Meat Company! They set up shop in Uruguay, among other places, and proceeded to make shitty beef stock in enormous quantities, turn it into little dry powdery cubes, and ship it back to Europe. And so the stock cube, too, was born from shitty beef stock!

Someone else mixed a similar ‘extract of beef’ with more dried and ground beef in England and created Bovril, which is now owned by Unilever, who also own the domain name soup.com. Good for them.

So that was fun, but the paper copy has awesome formatting that I didn’t do, because I do words, and Ami is the zine professional. She also did the cross-stitch cover image for the zine. It’s awesome. And Housingworks has paper copies.