Based on some good feedback, I’d like to revise and extend my previous bit of ontology.

First, and most importantly, I need to walk back some of the universal claims. Dennis Loo (who was my RA at summer camp in 1997), made a very good point on Facebook. I said that art is “how we exchange all the stuff we can’t possibly exchange with money”. Dennis points out “I’ve had very few scientific or mathematical ideas exchanged to me via art.” He also wonders about the breadth of my definition of art, so I should shape that up a little, too.

I should say that by “art” I mean basically any form of cultural or creative output, and I mean to use this account of the function of art as a part of a definition (to the extent that I want to offer one at all). Like any big fat categorization in philosophy, though, you run into lots of problems when you try to firm up the boundaries around a category. Crucially, for my account, being “art” or “not art” isn’t a binary state. I don’t think that you’ve got paintings and symphonies on the one hand, and then utilitarian objects and habits on the other.

One could take muddiness like this and argue that all creative or elegant mathematical concepts count as “art” in some sense, but then you get into the question of how to distinguish any idea, or any enacting of culture, from any form of creativity or art. And I don’t want to do that. I also don’t think it’s relevant to the argument I’m making. It’s definitely an interesting extreme case that points out where some of the underlying concepts break down, but I don’t think it invalidates the main utility of the argument.

Best use of the idea

Secondly, I want to speak to where I think this idea is most useful, rather than where it breaks down. I think it’s most useful as a test for any application of economic ideas to arts policy. If you’ve got an economic idea like supply and demand, the thing being supplied and/or demanded is usually goods and services. Sometimes you talk about the demand for money itself, liquidity preference, etc., but mostly you talk about money being used as a way of storing value and mediating exchanges of goods and services. But a lot of times when people talk about supply and demand in the arts, they over-emphasize the supply and demand for art itself (as if art were just another commodity like pork bellies), rather than for the cultural value stored in art or performance, or the cultural content being exchanged there.

A lot of discussions of arts policy can become deadlocked when art is seen as an end in itself, not as an incredibly effective tool for furthering the non-economic, cultural goals of governments, societies, and individual people. This is, hopefully, just one example of how hypothesizing two separate systems, with money and art playing a similar role in each, can help make discussions of arts policy more productive.

That’s where I think this idea can be most useful, in helping people more effectively borrow economic ideas for use in thinking about the arts.

It naturally follows that the test I really want to apply to the idea is to try to use it in other discussions of arts policy, economics, and entrepreneurship, rather than on the margins. 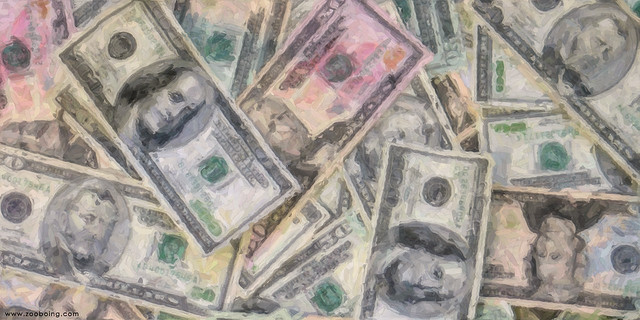 Thirdly, I do find this notion of what art is, “money for some important ideas”, a lot more compelling than other definitions I’ve come across, like “the fundamentally useless”, or “anything you say might be art is totally art.” I like it because it does define art in relation to people, without focusing entirely on popularity. The value in art, by this account, exists in the value stored and the exchange mediated between people. But it does go a step beyond the hard economic valuation of art that says “good” art is “commercially successful” art, or that art the market doesn’t pay for doesn’t deserve to exist.

I do still think it’s not a home run argument, and I definitely take Dennis’ points, and appreciate the critique. I at least am going to keep trying to use this model, and am excited to see how well it works.