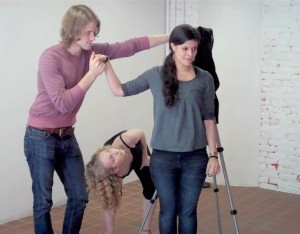 Earlier this month Rose Ginsberg and I got together a group of actors to workshop some mime sections of Summer’s Twilight. We spent the afternoon trying out different things, working scenes till they gelled, and filming the process to create a kind of video libretto. The filming was as low-key as you can get, just two people with not very good cameras shooting wides so I can see what’s going on. The result is a very useful set of clips that lay out the physical language and timing of these scenes in the same way a script does in scenes with words. I don’t think I’m going to edit the clips much, for two reasons. First, the runs of each scene really just improved as we went, ending with the best take. Second, these aren’t the actual performances I’ll be using, and my score needs to have some give and take, so it’s not really worth the effort of refining these clips that much. It’s much more practical to just watch them for a sense of timing, of what the center of focus is at each dramatic beat, and of how to match that in music.

So often, particularly in musicals, very interesting -but wordless- action is accompanied by just a vamp, as the orchestra waits for the cue that will bring in the next section. I’m trying to avoid that, and create music that matches the physical beats as closely as in other scenes it matches the text.

It was a new way for all of us to work, but everyone got really into it and made some great stuff. We met at Rose’s office, a brownstone in Chelsea, on a Saturday and used the empty retail space on the ground floor of her building. First we ate delicious Murray’s bagels and drank coffee and read through the scene. I’ve been in a bunch of rehearsal readings with Rose and she always gets the actors to this point that I love. As we’re all reading and discussing how the scene works, this energy builds to just stand up and do it. Then, as a group we all just do that – it’s a really exciting feeling. Once we got started it was just like a normal rehearsal. Everyone pitched in with ideas and as we ran the scenes the characters took shape. We moved jokes, added a flower to both scenes (played for our purposes by a pen), and generally had a complete blast. Tania started suggesting wonderful sneaky things for Puck to do, and Puck became her role for the day. Carson, who I’d met at the New Music Bake Sale the week before, dove right in and was really good – he’s a percussionist and a dancer. Amanda did a great job bringing out the differences between Hermia and Helena (she played both). Julia brought her great eye for physical humor and choreography, and when Carson had to take off she stepped in as Demetrius. Victoria and Erica, both wielding cameras, also brought a lot of good ideas to the process, and helped make the rehearsal really creative and efficient.

I’ve got a couple more scenes to workshop like this, and once the Meet The Composer Studio is launched (when I think I’ll have some kind of a break), I’m hoping to do it again.