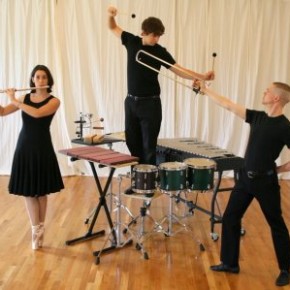 The Fourth Wall Ensemble are old friends of mine, and I love them dearly. They play instruments and move around a lot on stage. That, in case you missed it, is totally up my alley.

They’re uploading a bunch of great little youtube videos that do a lot of work for them all at once. They’re great marketing because they’re fun to watch and they show you the members of the ensemble being human and approachable. But what gets me so excited about them is that they’re also actually part of the art-making process.

The rehearsal and experimentation they were doing anyway. But now that it’s in a video you can watch what they’re doing from your phone (like I did last night before I fell asleep). And here’s the cool part: you can tell them what you think of it. Does the technique look insanely stupid and generate a bunch of mean comments? Does anybody actually watch the video? How does its popularity compare to the other new-trick videos they’re making? And if you get really interested, or have some experience as a director, choreographer or musician, you can suggest pieces for them to play with this trick… or you can just write them one.

The Fourth Wall is getting their marketing done and using it to make their art better instead of just promote it. Keep it up. And watch this, it looks uncomfortable and incredibly fun: