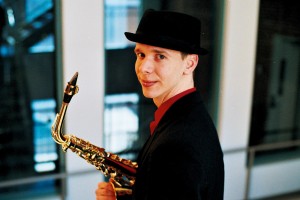 One of the weird side effects of coming out of Peabody is that you get to know a fair number of classical saxophone players who are also bizarrely accomplished recording engineers.

Ian Richter is just such a one. I’ve crossed his path before, but the first time I got to know him properly we were sharing a car ride to New Haven where I spent most of the time talking about economics (don’t ask – it’s not a great way to keep everyone going during a road trip).

Gary Louie, the saxophone professor at Peabody, he of the sweet tone and dramatic arm movements, has taken to giving his students a crack at my setting of The Love Song of J. Alfred Prufrock. So at the end of the trip to New Haven for New Morse Code‘s premiere concert (it was great) I got this recording as well. Even better.

He’s still in school. But that hasn’t stopped him producing his own live recording, which for this piece requires a lot of re-balancing of the spoken and the played portions as well as all the usual mucking about with reverb and the rest of it. How many recordings feature the engineer performing, anyways? Neat, huh?