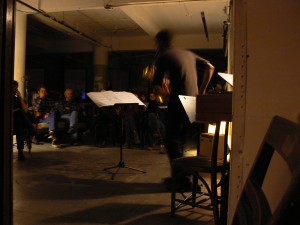 And that could look like a bad thing, but on balance I think it’s great.

People have vastly more choice about what culture and entertainment to consume with their time than they did in the past. And they can get all the films, tv shows and music they like from home, plus all the stuff being created specifically for the web. So getting people out of their houses to actually go to stuff is harder than it used to be.

“Come hear my music” “But I can hear it at home, it’s cold out, and tickets are expensive” “I can’t really argue with that….”

“Come to my show – we’ve got music, food, drinks, your friends, foursquare specials, and generally a really awesome night out” “Okay, that sounds fun!”

There are two ways to look at this. First is the hidebound traditionalist way. Artists have to spend time on all this other stuff to go with their concerts that they should be spending on their art and just their art. This is terrible, it’s distracting from the real work and diluting our cultural blah blah blah…

Obviously I’m on the other side.

We’ve got more competition, and we’re upping our game. Instead of just presenting music, and relying on the scarcity of the art to draw people into whatever situation we can present it in, no matter how unpleasant, we have to create a full experience that will get people out. Is the booze and food and relaxed social atmosphere pandering to how people want to experience culture? Yes. That’s good. People have more options to experience culture how they want to. It’s for everyone now, and in these new contexts they have a much better chance of having those transformative artistic experiences that feature in the memories of all of us who decided to do this with out lives. Isn’t it great?

Yes, artists have to work on a full experience instead of the narrow bit they used to focus on. That can look like a dilution, but really it’s a shift of focus from the materials and tools of the art itself to the experience of the audience. Instead of thinking fundamentally about rhythms and pitches, I get to focus on making people happy, and giving them life-changing artistic experiences. Pitches and rhythms are just tools. I think that’s awesome.

In case you’re worried about the death of classical music

To start with, the art isn’t going anywhere. The reason live events are under pressure to change is that art is in more places more of the time and more accessible to more people. There’s a problem paying people properly (a big one – it’s for real), but at a basic level more art = good. The art is not under threat. At all. Stop it with the culture is dying malarkey.

“But live performances have more competition now, and it’s harder to put on shows than it used to be,” I hear you cry. I thought we were capitalists? More competition means we have to get better, it means we have more pressure to actually serve the cultural needs of people. And the great thing about the huge variety of choice on the internet means that we’re no longer competing to be one of the 20 songs on the radio this year. It means we’re competing to authentically reach people who want great cultural experiences.

It’s true that great art is often misunderstood and shouldn’t have to pander, and it’s hard to be a visionary and lead people if you’re trying to give them what they already know they like. But if anything the pressures on the live event from the internet are helping solve that problem, not making it worse. The old system was terrible at that.

Now I use the word social

Look around at these new cultural events, and what you’ll notice is the same thing that you hear about businesses. “It all has to be social now, from the ground up. Connect authentically with your market! Let people talk to each other! be friendly!” Everywhere you go people say the word social as if it’s the revolutionary way of the future. And it kind of is, but it’s more a tearing down of old ways that people were stuck relating to each other, and replacing them with the even older ways that people have always liked relating to each other.

After Ruckus Amongstus, I thought, as a lot of showrunner types do, about how much of the audience was my friends and how much was strangers. There were plenty of people in the house I didn’t know. Come to think of it there were plenty of people on stage I didn’t know. But I could trace my connection through friends of friends to almost everyone in the room. As musicians we’re trained to think of knowing everyone in the audience as a kind of failure. But here’s the thing: it’s not just my audience’s relationships to each other that are more social. It’s my relationships with them.

It’s not that my friends came to my show (though they did). It’s that new technology lets me think of my audience as my friends.