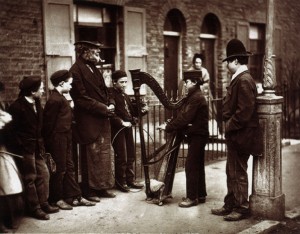 Social connections are definitely wealth: they let you coordinate complex tasks and accomplish goals you couldn’t accomplish on your own. But they are fundamentally incommensurable with money. There is no sensible way to build a friends:dollar exchange rate; it’s just silly. This is true for a bunch of reasons. You can’t ‘spend’ friendships in the same way. Certainly you can ask for a giant favor that ‘puts a strain on friendship’, but it’s just as easy to ask for a fun favor, or help with a project, and at the end you’ll have an even more valuable social connection than you had before. Also, you can create more and more friendships and social connections all the livelong day and not worry about devaluing the friendship. The more social connections there are, the more valuable they become. Money, under normal circumstances, becomes less valuable the more of it you print. There are other reasons these are fundamentally different categories of wealth, but they’ll do for now to show the point.

On the margins of money

Social connections have always had a certain kind of collaborative money-like power, but you can’t see it at the level of mass-producing products and currency exchanges. Three places where you can totally see it, though, are these: the very poor, the very rich, and artists. These are places on the margins of money, where either because there’s so little money, or because there’s so much, money ceases to be the main medium for value exchange.

The very poor have to focus on family, on people, and on collaboration – I’ll watch your kids, you’ll help me with some housework – because there isn’t enough money to get things done any other way. When you can’t hire a plumber you have to ask your friend who kind of knows about toilets, and then you have a closer social bond. Loyalty and trust become extremely important in that context.

The very rich have so much money, and so many paid services, that their lives don’t really revolve around the making and spending of money. They have a lot more to do with who you know, and how you build, call on, and occasionally destroy social bonds. When you think of the Ladies Who Lunch(tm) you think of them doing things through social ties, to the extent that you think of them doing things. There’s an interesting overlap here with national leadership, diplomatic circles, and other power elites that are traditionally filled with super wealthy people, where social connections are also very important, and function at the summit of giant piles of money wielded by governments and corporations etc. It’d be interesting to work on how that social world is changing with the rise of social connections as an important category of wealth – but that’s a separate question.

And third, the artists. As I’ve written before, artists tend to get things done through social networks, calling on friends of friends, collaborators of collaborators, and bandmates’ mothers’ couches. This is partly because artists are generally cash poor, and therefore functioning on the margins of the system where money works really well. But there’s more to it than that – even rich artists tend to get things done in the same way. A bunch of people have written about the structural poverty of artists as a challenge when trying to improve the lives of artists. Poverty is one thing, but structural poverty is something else – it means that there are some underlying reasons that artists are generally poor. Even if you give artists money, that doesn’t really help them become richer. What’s up with that? All artists want to have more money – trust me, we’re really good at obsessing over getting paid. So why are artists structurally cash-poor?

But there’s more than money at stake

It’s because artists, by temperament, want to make art more than they want money. If we just wanted money, we would have become actuaries. But we want to make art, and we’ll take what we can get money-wise. If you give an artist a few thousand dollars, chances are they won’t say “great, a nest egg that I can save for retirement”. Chances are they’ll say “great – I can take fewer crappy freelance jobs, or do fewer shifts at the restaurant, and make more art.” Or we’ll spend it on equipment, or rehearsal time, or something else to do with the art itself. We don’t lose the money because we’re terrible at holding onto money. We lose it because there are so many other things we care about more. Now, this does mean that if you want to stimulate a money-based economy, give money to artists and we’ll spend it like crazy. But it also means we don’t tend to have huge bank accounts, and it’s hard to change that structure and cause artists to be richer in dollars.

But remember what I was saying about how social connections don’t get ‘spent’ in the same way that money does? And how making more of them makes them more valuable? Artists are structurally cash-poor, but not structurally poor in social connections. We’re great at building those, using them to accomplish goals, and developing a long-term network of audience members and collaborators. When we say that artists are structurally poor, we shouldn’t think of them as without resources – we should think of them as without cash.

As I keep saying, social connections are an increasingly important category of wealth, and can be used to accomplish complicated coordination tasks that used to be only solvable with money or big organizations. Now, you can’t get health insurance through your Facebook friends list. And you can’t eat your Klout score. But this whole thing is only just beginning, and the better our communications technology gets, the more powerful social connection is going to be for accomplishing all kinds of stuff.

I don’t think money will ever be totally replaced by social connection, but as this continues to impact the economy it’ll be fascinating to watch what happens, and what things are more about connecting than cash exchange, and how those connections persist and how complex collaborative tasks get accomplished almost automatically by huge groups of people with no money involved, no central direction, and not even the notion of being part of a group.

But my personal favorite outcome is this: we artists don’t onto money, but we’re great at holding onto social connections. We’re cash poor but social connection rich. And as social connections take on the ability to do more stuff you used to have to do with money, artists are going to become richer automatically.