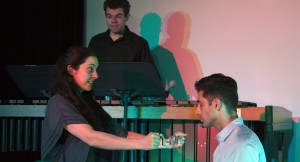 Last Saturday we did a development reading of Summer’s Twilight at Art House in Jersey City. It was an awesome event, with lots of amazing people doing really fun things. Plus everyone liked my food! Or at least, I got enough compliments that seemed sincere enough to me that I’ll judge the “fancy bar and food” enterprise a success. It also made a big difference in helping to pay the musicians. I’m really glad to have been able to do that.

Video is still waiting on me to have time to edit, and Zach is crushing the audio (he recorded as well as performed, because that’s Zach for you). Soon! I promise! In the meantime, here’s a Flickr set of stills from the night. That set includes one of the awesomest photos of my grandfather ever.

That’s always the question after a reading. What did you learn about the show? And what are you going to do about it? Possible third question, when are you going to do it? That last one is especially relevant to those us with day jobs reshaping grantmaking programs.

I still haven’t talked to everyone in the audience that I wanted to talk to. But I know a few things. The “dumbshow” with a lot of different phrases for the musicians to choose from based on the blocking developed with the director really worked. And it really underscores how much all of the performers have to be viscerally committed to the theatrical side of the piece. The way that subtle blocking gestures connect with the specific shapes of the music means that, yeah, this pieces needs a lot of rehearsal with some really great physical actors. Who are also top flight classical musicians. So that’s easy.

A lot of the new passages really worked, particularly the solo-cello-accompanying-dramatic-duet part. That was great. Big laughs. Also, re-structuring the accompaniment to get Puck and Oberon offstage when they need to be offstage, and let them be always, always in character, worked out.

Showing the audience who the fairies are as people, what they’re saying, and what they want as characters is still a challenge. Costumes will help, More control of lighting will help, and if we go that way, supertitles or prejections with text in (maybe based on hi-res scans of the first folio…). Most of all, long days in the rehearsal studio “fucking around with text” as our director Rose puts it, quoting from Slings & Arrows, will help. Victoria has suggested some really fascinating, and totally feasible (really) implementations of live animated projections to help show what’s going on. First finish then show, then get a budget, then I get live, projected animation. That’s exciting.

I need to give my brain some time off these next few weeks, but when I pick the pen up again I’m starting by working through to the end so I have a whole draft. When I need a break, I’ll sketch out what some of the fairy passages would be like if the text of the monologues were delivered by 4-8 offstage singers, adding another level of otherworldliness, and more comprehension of the language.

A lot of people had a really strong reaction to the Helena we’re building. Part of that is that Sarah did amazing work, and part of it is that the four lovers, in this version, are being built out in a way that they aren’t in the play. In the play, they’re interchangeable. Here, not so much. Here you can tell how they care about different things, and how their teenage sex lives give rise to a whole host of problems that basically propel the plot. Helena has a lot of depth, and is getting screwed by all of her friends, and her boyfriend, who loves her, is running away and confusing her. Hermia, as Elspeth put it in rehearsal, is “a bad friend”. Which is also a beautifully teenaged way to approach this situation. I’m really happy about those developments.

Oh – one other thing I learned. That level of sexiness, and that use of handcuffs, is totally appropriate for the show.

Late Update: I forgot to mention another great idea about creating a new silent mime scene, in which Oberon can do something really creepy, and seemingly malicious, early in the show. Which is great. I’m totally gonna write it, and I’m gonna hope it stays. It’s got Oberon, Demetrius, and Egeus, and it was Victoria’s idea. Twill be awesome.