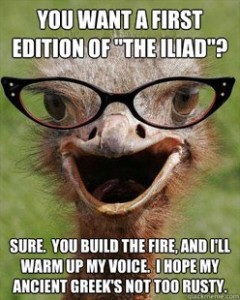 My friend Rachel Fershleiser, newly of tumblr, said this:

Think piece I don’t have the energy to write but maybe you do:

Internet memes seem to be moving towards the smallest sub-cultural groups possible and catching on that way.

– I made Judgmental Bookseller Ostrich as a joke on how there was starting to be an advice animal for every possible field/major/career.

– People who didn’t care about Ryan Gosling care once there’s a blog of him talking about a field of stat-based library science all of 200 people have a degree in.

– Shit Girls Say became Shit every possible racial, religious, and sexual identity say or have said to them.

Like, now it’s not enough for things to be universally funny? If they are micro-funny I feel super-special that someone made them Just For Me and I’m obligated to share/love them?

So memes are getting bigger by getting smaller? The hyper-specification of internet humor? Identity-based memetics? Anybody?

I think this is a pretty cool observation about what for want of a better term I’m going to call micro-funny. I don’t have much to add to the discussion of the evolution of memes, and how they’re changing, but this a really interesting trend to me for another reason.

It’s a great example of what I’ve talked about recently: increasingly complex tasks being accomplished by increasingly loose groups of people who aren’t in fact part of any organization at all.

As an example it’s great because you can see a lot of complex creation being done without any kind of organization. This isn’t a bunch of people who decided to be a group, even a loosely affiliated group, dedicated to making Ryan Gosling stuff. It’s a bunch of people individually deciding to do something related to it, but without any overall plan, without much effort, and without any reward in mind. They’re just doing it because it’s awesome.

It’s important that what they’re doing goes beyond sharing. It’s also making, and curating, and promoting and refining. “That Ryan Gosling thing” involves a lot of jokes written by a lot of different people in a lot of different contexts, and while they all get turned into white or black text plopped on top of a photo, and get shared on tumblr or facebook or whatever, there’s still creativity happening. It isn’t just sharing.

This isn’t a centrally directed thing, and no one is part of any organization however loose, and it won’t last one jot longer than it should, because people will just get bored at stop. But it’s happening. And the better communications and social media tech gets the more complex tasks we’ll be able to accomplish this way, without needing certain categories of businesses or service people or volunteer organizations. We’ll be able to just use our extended network of friends and acquaintances to cause all sorts of complicated things to happen.

For me the important part is that people naturally organize themselves socially, and it’s those social connections that underlie so much of business and politics as it is. As more and more stuff gets done explicitly through social collabroation, people will get a lot more comfortable, and a lot faster, because the only organizations they’ll be part of will be social, not corporate.

Okay, Huckleberry, bring it on back to the stable

So what does the rise of micro-funny memes matter at all to what you’re rambling about? Well, the fact that memes are going in this direction means that there’s something about them particularly suited to thriving in this loose-social-connection-based environment. Of all the complex things that could get done with social media based organization-less collaboration, why this?

What Rachel was saying about the hyper-targeting of the jokes, I think, tells us something about the nature of the behavior that leads people to participate in these things. Why did I make a judgmental bookseller ostrich? Because it’s awesome. Why do I think it’s so awesome…. well, I work in a bookshop, or I love bookshops, or I love people who work in bookshops. I personally am a giant bibliophile and grandson of a librarian who promoted banned book week by stuffing anything scandalous on her shelves into the hands of students – an amazing woman. I love it, so I laugh, and I share, and here’s the cool part, that’s only getting huge because the technology is faster, I create my own versions.

I love examples of new complex stuff being done with nothing more than social ties. If you see more send ’em my way. In the meantime, go laugh for a while at the Ryan Gosling stuff and the Ostrich of Judgment.