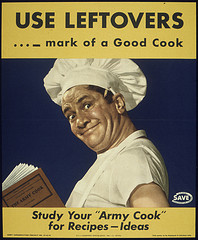 Last time I blogged about my two favorite professions, I recommended that musicians look at how restaurants deal with lots of quantitative and qualitative in-depth feedback from their customers (how many of what sold, what the waiters say the customers said, etc.).

As I’m on vacation, I thought I’d return to the subject. There’s something else musicians and chefs have in common. It’s hard for all of us to sell copies of our work. For musicians, the economics of selling recordings have, as we all know, gone foom. For chefs, technology simply doesn’t furnish us a way to sell recorded food. I mean, what would that even be like? We’d need a device to record an exact dish, and then a replicator from Star Trek, basically. Then instead of saying “tea, earl grey, hot”, you’d say “Give me Mario Batali’s Duck Tortelloni with Sugo,” or “give me Nobu Matsuhisa’s sashimi dish from June 23, 1994.”

Neither of us can actually sell copies of our art in the way we might like. And I think we can probably compare the things that we do do in place of it and get somewhere productive.

So what do chefs do? They have restaurants with lots of super-high-quality interaction with their customers. We can’t really do that in music, but it’s interesting. They also sell ancillary products, like cookbooks and, for the TV superchefs, branded spoons and olive oil and pots and pans. This is basically swag. They also do instruction, but often they teach on TV. Could we do a composer’s half-hour TV show about the inner workings of music? I don’t think it would do much, but it would be fun.

The interesting thing, though, is the sort of coherent package that’s built up around chefs like Mario Batali and Rachel Ray. You can actively participate as a fan, and communicate your membership in that affinity group, without ever actually tasting the food that these people cook. Still, particularly with someone like Batali, his approach to food and cooking does get communicated to some extent through this weird marketing process. It certainly isn’t cooking, but some of the content of his ideas is still in there.

All-around marketing campaigns have existed for musicians for years. Buy the t-shirt, the poster, whatever. I wonder if there’s anything special that we can learn from the coherence of the affinity group that you’re part of by using Mario Batali’s cookbooks, etc.

I suspect it’s just a matter of emphasis. A lot of the marketing mixes you see from musicians build this whole experience, but the end result is still “and please buy my full-priced album.” But chefs simply do not have an album. It’s impossible, so we can look at where those experiences culminate, and build our own customer flows without album purchases at the ends of them.

Okay, back to shellfish eating. I’m on vacation after all.