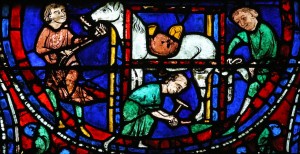 So this is hypothetical-business-model-for-modern-artists-type-post. On the latest episode of Actually Happening, we were discussing a secret society called The Supreme Tribe of Ben Hur. They got started after a secret society promoter (actual job!) asked the author for secret society rights (really). The members were quite silly, like the Freemasons, before becoming the USA Life One Insurance Company of Indiana. We went through some of the economics that take you from a secret society or professional guild (for instance the guild of masons that got the whole Freemason thing started) to an insurance company.

Basically, these were social clubs that would use your dues money to help out disabled members, or take care of the families of deceased members, etc.; a similar function was performed by medieval trade guilds. The secret society initiation process would make sure that you were a good bet from an insurance-company point of view (of sound mind and body, for instance). And the monthly meetings-which-are-also-parties would keep younger people signing up, so that not everyone would need the society to pay out at once. Those benefits are great for the members, but don’t offer any value in their careers apart from connections to other members. People outside the group don’t have any extra incentives or enticements to do business with the members or with the group as a whole. But back when these societies were medieval trade guilds, like the masons as opposed to the Freemasons, apprenticeship led to being a jack, then to being a master. And being a master, recognized by a guild, was the only way you could get certain jobs. Guilds served a certification function, which was awesome in a time when information moved really slowly, and you couldn’t check on someone’s references, since their previous employer was quite likely in a different country, and nobody could read. Over time, that function became less important, and if you ask a modern Freemason to chisel you a Corinthian Capital, you’ll probably have another think coming.

Guilds also advocated for the interests of their members, grew more and more anti-competitive through the enlightenment and the industrial revolution, and sometimes morphed into non-professional organizations as their role in trade got sillier and sillier. But there are some interesting needs in the modern market for highly creative labor that resemble those that gave rise to the guild system in the first place.

In the context of the last thousand years, full-time employment with a small number of institutions over the course of a whole lifetime seems to have only been around for a relatively short time. More of us are freelancing more of the time, and so the sort of financial stability that you get from paying dues into a communal pot with other people, and knowing that that pot will be there when you really need it, is attractive. Of course, there are other ways to do that in the modern world. We have things like disability insurance (which most freelancers don’t have), unemployment insurance (which everyone has), and other mechanisms. When you imagine paying dues into a pot with a lot of other creative people to create a fund to take are of you when you need it, what needs do you think of it fulfilling? What needs would you not need it to help with?

Health insurance is the first on my list. With organizations like the Freelancer’s Union and Fractured Atlas, and Obamacare coming in, it’s hard to see why a modern guild would ever pay doctors. Of course, government policy could be a lot more friendly to freelancers, from tax law to healthcare to a real social safety net, and if that happened (please, gods, let that happen), guilds would be needed for even less in terms of direct care for members.

Side note: my job is to help artists, and it’s hard not to see ‘helping artists’ as boiling down to lobbying for a stronger social safety net. Especially as the number of independent workers outside the arts keeps rising and the middle class gets hollowed out even more, it’s important.

For medieval guilds, this was the key function. If you’re a master, then you can work, have apprentices, build a life. If you’re not, you can’t. And the guild decides who’s who. That rubber stamp of approval had to exist because due diligence was impossible. Two things made this function less necessary. First, due diligence became easier. You could in fact get a letter from a previous employer more easily as time went on. And second, other rubber stamps, from universities, took the place of the guilds’ rubber stamps. Universities awarded degrees of ‘master’ and by the time we hit the mid-twentieth century those were the marks of approval everyone was using.

But for creative workers, and increasingly for everyone else, the university rubber stamps aren’t working anymore. First, they’re way too expensive. Second, lots of people with degrees are terrible. And third, now that you can actually go get awesome at a lot of stuff by yourself on the internet, lots of people without degrees are totally mind-bogglingly awesome. And so for people who want to hire creative workers, it’s harder and harder to know who’s good.

My hunch says that if you wanted to build a modern guild to do certification, each guild would be sized more like a 19th century secret society. No more than maybe 150 people at a time, many if not all of whom have collaborated before, and who agree to vouch for each other’s talent and awesomeness. In a lot of ways the certification function would be a faster and more public version of referral networks that already exist. Tons of jobs, creative and non-creative, already function by referral, and a shared public face would help potential clients decide who to approach based on more than a non-expert appraisal of an out of date portfolio.

The parties keep the social ties strong, and let you vet new members for their working style as well as their work. Also, half of the awesome ideas I’ve ever heard for projects have been heard over a beverage of some kind. When I’m trying to get something worked out with people, I always try to do in the context of a party, or drinks, or something else social.

There’s less of a need for initiation nonsense or for insurance fund eligibility, but the of-sound-mind-and-body thing is still really important for making sure the artists you’re throwing down with are awesome at their jobs.

Plus I suppose you can schmooze clients, and make the group itself more important by hosting good parties for non-members as well.

Pooling money for insurance purposes is less needed now. And hopefully it’ll be even less needed in the future. Plus, freelance artists, as I keep saying, don’t have any money. So is there a reason to pool money? Well, special needs could arise for individual members. It would help defray any organizational costs, like parties (there shouldn’t really be any other organizational costs, given that it’s the future now). Maybe a guild of this sort could have shared assets, like a couple cameras, or a seat or two of creative suite, or recording gear.

One of the things that goes along with pooling money, and might actually be more useful, is an incorporated entity that could be used by members. If there’s a 501(c)(3) at the core of the guild, members could have easy access to independent fiscal sponsorship without the need to give 6% to Fractured Atlas, lovely though they are. Tax deductible purchases, and tax deductible donations to creative efforts in line with the mission language of the non-profit, and not the individual interests of any member, would help raise money. Maybe if the guild decided to mount its own productions it would be helpful for the non-profit to have a series of subsidiary LLCs for individual productions, in much the same way that films are incorporated in Hollywood.

Some people might even want to run their freelance income through the guild, either as a for-profit or non-profit entity. It could really help on accounting, and might have tax benefits.

Depending on the needs of the members each group might want different things, like co-working space, shared web-hosting and email, a shared lathe or kiln, performance space, enterprise software licenses, or even lobbying roles in local government.

There are some groups doing some stuff like this. The folks at Some Office come to mind (full disclosure, I hired one of them through my day job. Nick did awesome work). There are also a lot of ‘digital agencies’ that are little more than loose-knit groups of freelancers (some, obviously, are as concrete as regular agencies). These fulfill the certification and referral roles (with photos and bios on the agency site), and the shared-corporate-identity thing, but the parties and the money-pooling are less important. Also, the way they’re structured varies incredibly widely.

Some of the bigger co-working spaces, particularly here in NYC, serve some of these functions, like General Assembly, Fueled, and Green Spaces.

It’s hard to figure how I’ve gotten 1500+ words into this post without saying the word ‘collective’. I guess I’m used to collectives being basically entirely disorganized, and not really helping their members or accomplishing much.

Well, that was fun

Secret societies, Medieval trade guilds, insurance and mutual benefit societies, collectives, digital agencies, co-working spaces, non-profits and their for-profit subsidiaries. I love thinking about the needs of today’s artists in terms of any relevant historical model you can lay hands on and find some relevance in. Because if something’s worked before, then you can compare the context in which in worked to the crazy-ass context we’re all making art in now, and see if there’s anything you can learn.

Plus secret societies are silly and Medieval history is super fun.

Who wants to form a guild? I’ll batch up some cocktails for the parties.