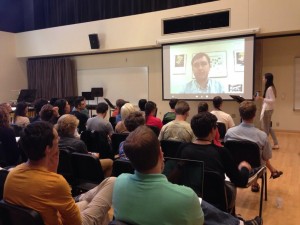 In a lot of ways this is the fourth post in my oft-referred-to Kickstarter planning series from back in the day, and from over in the sidebar. This is the as-prepared text of my talk for The Fresh Inc Festival, which is happening right now in and around Chicago and Milwaukee. The talk is specifically for young and entrepreneurial classical musicians, but has some messages for others, too. I didn’t deliver this verbatim, but for those who attended, this should be pretty familiar. For this post, I’ve left out the gloss on the mechanics of running your campaign – for that head over to the posts linked in the sidebar, or to any of the other awesome sites that teach this stuff.

Thanks to Melissa Snoza, Carole Deeter, and the whole crew at Fifth House for having me, and for bringing entrepreneurship and new music together in such an awesome way!

First, for the people in the room, here are some links I mentioned. If you don’t see one you remember, let me know and I’ll add it:

So, you guys are pretty familiar with this stuff. 5% goes to Kickstarter, 30 days, have a video, all or nothing, etc. – I’m going to focus on some of the bigger issues about this stuff, and the structure of a career.

Also, there’s a spreadsheet on my site that’s built to help you plan your campaign really really thoroughly. It’ll make your life easier – it’s got all the formulas built in, and a lot of guidance on how to plan.

I should probably also take a moment to clarify that I am recommending that you run a Kickstarter campaign, and not an IndieGoGo or a Pledge Music or even a USA Projects campaign. The costs are about the same everywhere, and the benefits of using Kickstarter are much higher. Your backers have heard of it, and probably used it before. That means that you’re borrowing an established brand to help promote yourself – and that’s valuable. Also, the software you and your backers will be using is just plain better, and that’s worth a lot, too. It makes it easier for people to give you money! The all-or-nothing aspect of Kickstarter can be scary, but it’s a feature, not a bug. Plan well, and that hard goal can be a great reason to back your project instead of a source of fear and stress.

I think every one of you should run a Kickstarter project. Not because crowdfunding will make your financial life suddenly awesome, because it won’t. I want you to do this for two reasons. First, because it will crystallize your extended network into the beginnings of a fanbase that can support you through your entire career. And second, because it will force you to learn a lot of skills that will serve you super well for the rest of your life.

Backing your project will crystallize them into a community that has something in common, and can accomplish awesome things with you to lead them. We all know the old career paths of classical music are dying, and though we should still go for the orchestra jobs and the commissioning grants (especially from New Music USA!), we’re being irresponsible if we don’t also build our own independent fanbases.

And Kickstarter is a great way to start doing that, because you have to start with the people in your life. Bring them the art that you make and amaze them. Make them want to be part of it, and make them want to share your art with everyone in their lives. That’s what we’re talking about when say “grassroots community building” – it’s walking up to people and getting them excited. That’s how you start to build audience.

And with that audience in your back pocket, every conversation gets easier. When you negotiate with concert venues, record labels, and commissioners, you’ll bring guaranteed sales and a built-in audience with you. Really engaged fans open doors in a way that 2,000 facebook friends just don’t.

Here’s the thing. If you’re really committed to making your money off of your art, your Kickstarter backers aren’t just your fanbase. They’re your retirement plan.

Money is gone after you spend it, but the love your backers have for you and your art can be spent over and over again: on nights spent on couches instead of in hotels, on tickets to every show and copies of every CD, on volunteers instead of staff at events, on intelligent feedback on your latest experiment, on word of mouth marketing, and on negotiating power. Just never piss them off (I’ll come back to that at the end).

Second, let’s talk about the skills you can learn from Kickstarter. There are a lot of small skills you can learn in principle at places like Fresh Inc, but that you don’t really get rock solid until you do them for real. Those are things like budgeting, customer service, and web video production. And we’ll go into those when we walk through the process, but the most important stuff you can learn is a lot trickier. It’s about fear, and taking risks.

People are great at not taking risks. We’re scared, and we don’t want to be responsible if we fail. And so, even when we do ambitious things, we find little ways to make ourselves feel safe. And safety’s nice, but when you keep yourself from making a bet, you definitely won’t win it.

After we go through the life cycle of a Kickstarter project, we’ll talk about the ways people most often sabotage themselves.

The Missing Gloss on my Other Three Blog Posts

They focus on Budget, Rewards, and Backers. For more on Kickstarter videos and other things, Kickstarter’s School is the best.

Now that we’ve gone through the process in a little bit of detail, let’s go back to the “how not to sabotage your project before you start” part. There are a lot of ways that we can pretend that the task at hand is easier than it really is, lower expectations for ourselves, and avoid risk and responsibility. In the end all we do is make sure that we don’t have a chance to succeed.

This isn’t just a problem that young artists face, either. Entrepreneurs and business people are constantly making these mistakes, and if you can learn how to avoid them, you’re going to have a huge advantage.

Here are the two biggest mistakes I see over and over again.

Forgetting to ask for money. This may seem obvious, but you’d be astonished how many people describe their project in great detail and never say “please back my Kickstarter.” This isn’t just a problem on Kickstarter, either. Big time development directors, heads of universities, and startup founders looking for investment do this all the time. You get to the end of the conversation, and instead of saying “please give me a million dollars”, you say “thank you for your time.” And you do it because you’re afraid of rejection. Well, sometimes people will say no, and that’s fine. Be polite. Be up front about what you want, and when the moment comes, remember to ask for the money. And it won’t hurt the relationship – in fact it’ll probably buy you respect. Also, all studies done in the universe say that you get a ton more money if you actually ask than if you don’t.

This mentality, of being ashamed to ask, is really pervasive, and it’ll crop up again and again in your process. Work to overcome it. Also, go watch Amanda Palmer’s TED talk.

Skipping the Projections – failing to examine your own assumptions. EVERYONE tries to get out of the part where I make you do a real projection with your entire address book. Everyone. This isn’t difficult mathematically, but emotionally it’s practically impossible. You’re going to put it off. It’s hard to put a dollar amount next to your mother’s name, even if you know she’ll give you $50 exactly.

This is called “If you build it they will come” thinking. And it’s really dangerous. It’s really tempting to just assume that things will work, and not look closer at the details of where the money will come from.

At first glance this can look like being lazy, like not wanting to do the math, but it’s actually a much deeper problem than that. It’s about not wanting to take responsibility for failure.

If you don’t get serious about where you think the money will come from, and then it turns out you raise way less than that, it’s easy to make excuses. “How could I have known that all those people wouldn’t back my project? I’m not psychic!” Those excuses can be really comforting, but they’re lies. Of course you’re responsible – it was your plan, and your assumption! But it’s a comforting story to tell yourself, and everybody’s tempted to do it, and avoid that responsibility.

Your brain is really sneaky. When it knows there might be something wrong with your plan, it tries to keep you from looking closer. And then it gets defensive – it builds a big guard dog in front your most unfounded assumptions. It tells you that you don’t have time to do the analysis, that the math is hard, and that you’re assumptions are totally right! Don’t worry about it! Kill. That. Guard dog.

All projects have moments like this. Lots of moments like this. And finding and testing your assumptions before you bet the farm is really hard. It’s a constant struggle – you’ve got to constantly ask for help, preferably from smart people.

But your first Kickstarter project is a great chance to get used to killing the guard dog. You’re going to make an assumption about how much money you’re going to raise, and you can analyze it by putting a dollar amount next to every name in your address book. Get in the habit. Stay in the habit.

So Kickstarter is really hard work, but it’s massively worth it. You’ll learn a huge amount really quickly, you’ll get an actual artistic project done, and you’ll start building your nest egg, I mean community.

We didn’t grow up thinking that we’d build communities around our art this way, and we’re all starting to understand what that means, but for classical musicians I think it’s particularly hard.

More than maybe any other art, classical music still buys into the romantic ideal of the artist’s pure inspiration that should never be polluted with input from others. We’re all here at Fresh Inc because we know that way of thinking doesn’t work anymore. But at least for me, I’ve found that getting that idea out of how I make art has been a constant struggle, and it’s one that Kickstarter has helped me face.

What I said earlier about building an audience and never pissing them off? That can seem like it flies in the face of our entire training. “Who cares if you listen” right? We’re supposed to be going beyond our audience’s expectations and pushing them with our pure inspiration! Well, maybe. We should be able to push our audiences and we have to push ourselves, but most audiences I know want to see new and amazing things, and I don’t want to write music for the bottom drawer of my desk.