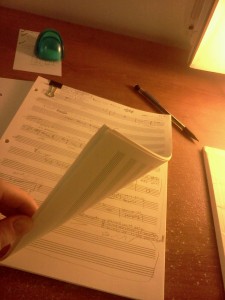 I agreed to write this piece at a party on December 30th. It’s being performed on March 17 by Rhymes With Opera.

The salon’s going to be a wonderful event, with lots of musicians trying out new things, playing music for each other and the audience, and eating what we all bring to share. I’m hoping we’re going to be able to get the whole thing up on YouTube. We’ll see.

The piece is now finished. Last night I made the last composing decision about what sounds happen when and in what way they’re made. But the pencil score I’ve made is basically useless to anyone who isn’t me. I still need to notate it. What I’ve got may accurately describe the sounds I want, but it is certainly not a usable set of instructions for how to make those sounds.

Making those instructions, the playable score, is what I’m going to be doing this weekend. If I don’t get it done and delivered by Monday morning I’m officially late, and very rude to the generous musicians who’ve agreed to take on the piece in the first place. Really I’d like to be able to give them a whole month with the score, but that’s clearly impossible, so I’m just giving them this blog post, with links to both the pencil score and text of the piece, both in google docs.

Making the score will be fairly complicated, even though there are, if you look at the score, very few notes. But because I’m aligning individual notes to individual syllables of music, and not using metered measures that much, getting everything just where I want it is going to be a very fiddly detailed job, and I expect it to take 20-25 hours to get the score made just the way I want it.

I’m going to have a fun weekend. In the meantime, enjoy the text and score! Let me know what you think!