I don’t really like cabbage, but the CSA is basically like a slow motion episode of Chopped but only with vegetables.

So now I know that I like cucumber salads, and I have this recipe for cabbage soup.

Start by chopping and washing the entire giant head of cabbage that you can only sort of believe they gave you in the box. Then fry the whole thing in any schmaltz, bacon fat, or other animal grease you have available. Chuck in salt, which will pull out the water and make the cabbage steam/boil for a while, but eventually you’ll drive out enough water and get some caramelization on the cabbage, which you really want.

(And yes – the cabbage frying is pretty much the only key difference between this cabbage soup and the swiss chard soup in the last blog post. This is what a CSA does to you.)

When the cabbage has browned a bit, throw in any other aromatics you like. I chopped up the peppers we got in our box this week, and smashed up a few cloves of garlic this time. Those went in with the liquid, which was a lot of chicken stock and water, so they didn’t fry at all, just boiled, but that’s fine for this.

Get the stock up to a boil, then let it drop down to a simmer; better smells in the kitchen mean less delicious food. Then throw in some starch. Rice is good, but this is tiny pasta. It’s chewy and tasty. Don’t use any starch that will take more than ten or fifteen minutes to cook through.

For seasoning, fairly standard: fish sauce, soy sauce, worcestershire sauce, salt, and pepper. On my bowls I put whatever hot sauce I like; vinegar based ones are pretty good. I brought some into work, too, because omg there was a lot of soup, and my colleagues liked it with hot sauce and parmesan cheese. Can’t say I disagree. 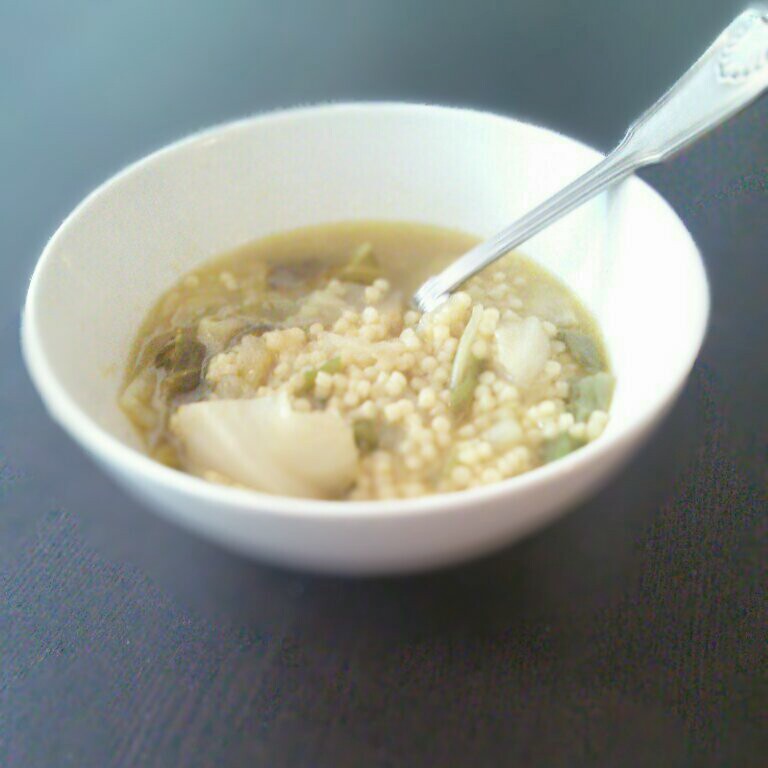