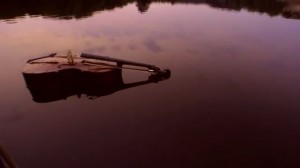 June 5, the day before my birthday, Mike Feldman and I sat down with Zach Herchen to go over his latest sound design work for Seafarer. It’s fantastic. The world of the film was starting to emerge in the last round, but this time he really got into the details, and started to bring mixing into the way he handled things. One of the things that had the most impact was the way he handled the different realities of each kind of sound. The cello and the poem are in a different world from the sound effects of the film itself, and hearing them have different reverb really drove that home. Each moment was played out in the sound with such clarity. Making this movie has been a great, but frustratingly long process. But everyone I’ve worked with on this has done something amazing, that feels like something from a dream turning up in real life. It’s like something I imagined the first half of, but was sure was impossible, suddenly works perfectly. When someone takes on your vision and makes it come to life, it’s an incredible feeling.

A lot more has been going on than just that, though. I’ve got a new title at Meet The Composer: Special Projects Manager. My work there has changed quite a lot from when I started. Instead of tag-teaming the development work with Ed Harsh and making sure the office runs I’m working on a new initiative involving a lot of cool stuff – web development, composers, ensembles, etc. – we’re not announcing much of it right now, but I’ll post more when I can. Well, in truth, I’ll post links to MTC’s announcment with lots of exclamation points, but you get the idea. It’s a great project and I’m really excited about it.

Last but not least, Thesia’s fundraiser for Passchendaele was last Thursday, and it was a fantastic success. The more I work with Thesia Arts, the happier I am to be producing with them. As artists, as producers, as people – they’re just a treat all around. The exact revenue is still being added up, but it’s just about what we’d hoped for in the budget, with maybe even a little extra. For a new fine arts production company in this economy, that’s fantastic news.

I came on late in the project, and so most of what I was doing leading up to the fundraiser was filling in the gaps to make what everyone else had planned run smoothly. That meant mostly doing some Twitter and Facebook marketing, prepping some food for the event, and spending the event itself in the kitchen pouring out the wine tasting. As a die-hard foodie, fairly serious cook, and all around organizational guy, the chance to actually work any kind of food service was really pretty fun. Everyone was sympathetic I didn’t get to enjoy the party, but I had a blast working out how many tiny pours of wine we could do per bottle, and plating trays of tiny tasting glasses and reminding assistant directors and actors pressed into service which wine this was and where it was from. Our stage manager, who’s worked in restaurants, swore I had actual experience doing this. That was probably more gratifying than I should really admit.