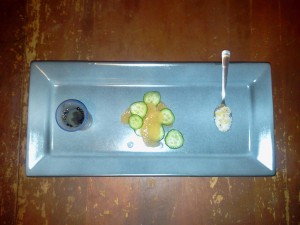 Shoot my brother. please! Basically, I’m morally obligated to taunt Dennis with his custom cocktail. He’s my brother – I have to. The name of the drink is one thing, but my favorite part is that he has to cut fiddly grapefruit supremes and wrestle with obnoxious plating requirements! This petty triumph, dear reader, is my first step towards world domination.

I’ve known Dennis from a very early age, when he taught me to get out of my crib at night, seriously annoying our parents. Since then he’s become a certified Rogue Geometer and all around giant geek with some very wacky side projects. I recently collected a more complete list of his accomplishments for a stele celebrating his 30th birthday. Several of his friends and family are having it inscribed in Linear B for future generations.

The Shoot My Brother

for the chaser:
-grapefruit supremes
-a splash of grapefruit juice
-English cucumber slices
-a dash of bitters (angostura or blood orange)

Put the whole peppercorns and cucumber-infused gin into a shot glass to infuse. Toss the supremes, cucumber slices, and a dash of bitters with a little of the grapefruit’s juice. Stir the salt with the pepper and finely chopped zest or candied grapefruit. Plate the three elements together.

This is a finicky cocktail. We all know by now about cucumber-infused Hendricks. For this cocktail infuse whole black peppercorns as well. I like leaving the peppercorns in the shot glass for service. It’s not hard to avoid eating them and they look really cool. I did the pepper as a second infusion in the shot glass itself to save on washing (ten minutes give a nice heat, but leave them longer if you want more kick). Black pepper and cucumber in gin is, by the way, awesome. I’m trying it in many different cocktails the next chance I get.

For the salt, the ratios are really up to you. You should be able to taste the pepper, and a little bit of grapefruit. I used the zest of the same grapefruit that furnished the supremes, but Dennis used candied grapefruit he had on hand when he tried the recipe for himself. Both work well; I might even add a little sugar to help balance the gin next time.

The chaser is based on one of Dennis’ inspirations. We were preparing a 60th birthday dinner for our parents, and Dennis came up with this gorgeous palate cleanser: clementine supremes and a dash of bitters. Amazing. You can plate it ahead. It’s elegant, surprising and refreshing. Here I used grapefruit, one of Dennis’ favorite fruits, and a very good partner for the gin (see both Wheaton’s Elixir and Dennis’ favorite punch recipe, Mother’s Ruin). The cucumber slices add crunch, and a lightness to the grapefruit’s bitter edge.

A quick note on supremes: they’re fiddly to cut but more impressive than they are difficult, so give ’em a shot. Basically, they’re skinless sections. Lop off the top and bottom of your citrus fruit, then carve away the peel and pith. Then take your very sharp paring knife and cut out each individual section just inside the membranes. That’s it, and everyone will act impressed (except Timo Andres).

This cocktail is a riff on a tequila shooter, traditionally enjoyed in rapid succession. Enjoy this drink more slowly, but finish with the grapefruit. It’s better that way.

This is the last of our cocktails for Cucumbers & Gin, but stay tuned for news on mastering the CD recording, editing the film, and just how hard Sean rocked the piece itself on game day.