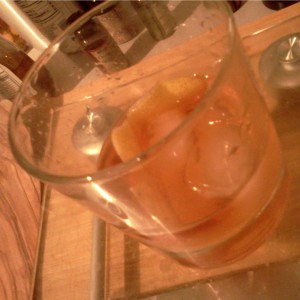 I haven’t been blogging a lot of cocktails recently. I apologize. I’ve been distracted by two things. 1) Writing a 20-some minute piece for Rhymes With Opera in two months, and 2) really getting to know the Old-Fashioned. I’m a solid whiskey-drinker, and I like my cocktails, so I suppose it was only a matter of time before my attention got funneled into finely tuning sugar, whiskey, bitters and citrus peel. That is, by the way, what I’ve been doing all this time. At the time of my last cocktail recipe post I owned, I believe, one kind of bitters. I now own… hold on a minute… eight? I think? I may have missed one.

Anyway, until now most of my experimenting has been along the lines of “That’s nice”, or “different whiskey next time?” or “maybe 50 grams instead of 60?”. A lot of fine tinkering, and some lovely cocktails, but nothing worth blogging about.

If you want a basic run-down on the old-fashioned, but without the orange and the maraschino, check out Rachel Maddow. Sorry, wrong link – this is the right one for the recipe.

But then I had this grapefruit, and when I combined its peel with the guilt over not having posted in a while I came up with a recipe that I do actually believe is interesting enough to post.

Drop the cube into a rocks glass and shake in the bitters. Add the soda water. Dissolve vigorously into a syrup. Add the whiskey and ice cube, shake gently if you feel like it, otherwise stir. Squeeze your twist to express the oils, rub the twist around the rim of the glass, and drop it in.

TWO kinds of bitter truth bitters!?! Well, yes. But you needn’t get full bottles, unless you’re a bar. You can just get the bitters traveler’s pack, which has all the kinds they sell in tiny, practical sizes, so you can get hooked on their product for $20 instead of $100.

This drink finds a use for the Biter Truth creole bitters, which I could never do before. I can’t stand them on their own; they’re basically the campari of bitters for me. Other people like them, I’m not sure why. But here, the resemblance to campari, with its grapefruit flavoring, makes it easy to tie those bitters to both the orange bitters and to the grapefruit oil in the twist and make a coherent drink.

Old Overholt is a rye I didn’t know until Dennis, my brother, introduced it as an unknown, surprisingly cheap and surprisingly tasty base liquor for cocktails at the Ruckus Amongstus show in January. I’ve rarely been without it since. It’s such a good value that I’m tempted to hoard cases. It also plays very, very well in cocktails without overpowering anything with its spicy rye flavor, which more expensive ryes will do.

The drink is a nice variation on a classic, and as you drink it you think first that it’s a grapefruit drink with whiskey, and next that it’s a whiskey drink with grapefruit. All in all I’m quite happy to come of out of my cocktail blog hiding with this one. I hope you like it, too.