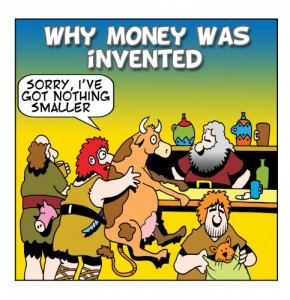 I’ve written before about how things that used to involve money and companies, and therefore appear in “the economy”, no loger have to do so, thanks to the internet. If I needed a place to crash in a strange city, I used to have to pay a hotel. Now I can use all these lovely communication tools to quickly contact a few hundred people, and if one of them or one of their friends can put me up for the night I can find out in a few hours at the outside, save the money, and have a whole different kind of transaction that fills my needs equally well.

The financial version, going to a hotel, contributes to normal measures of economic activity, like GDP, because money was exchanged. I may have made friends with a staff member, but that would be unlikely, and beyond that no relationship is formed. Next time if I have to stay in the same city I’m going to go to the cheapest hotel, not the one where I went the last time, because I’m trying to save money, not keep up with friends.

The non-financial version doesn’t contribute to “the economy”, but it does fill a need, so it seems a bit odd that it wouldn’t count toward the economic life of a society. The interesting thing to me is that the “stay with a friend” experience doesn’t involve hard exchange. It may involve “owing someone a favor” but people don’t think of their relationships like that, and the next time we meet it’s just as likely that either one of us will be the one eager to help the other. But asking for and receiving a favor created a relationship that has a definite economic value. The next time one of us needs something, we’ll be more likely to go to each other, and when asked, we’ll be more likely to help each other.

This sort of thing happens all the time, and has forever. But the ridiculous advances in human communication are taking this phenomenon from a rounding error economically speaking, and turning it into a much more significant cultural force. Like what’s happening in the entertainment industry, it’s easy to look at this and say “fewer purchases from companies are happening and that is bad!” But also just like what’s happening to the entertainment industry, there’s still economic activity, and there are more relationships being forged among people. It’s easy to dismiss human relationships as wishy-washy stuff not worthy of analysis, but to do so would be wrong. Not morally wrong, just sloppy thinking and bad analysis.

Trying to define the monetary value of a friendship is difficult if not impossible. And we all know that friendships matter in non-monetary ways, but there’s an easy mistake to make in assuming that creating a friendship isn’t a form of economic production.

I’ve been trying to think of a framework for understanding this for a little while, and I think I’ve got a decent one. And it’s this:

Money and the Internet are both solutions to coordination problems

In trying to understand this non-monetary economic activity, I went back to think about how we got money in the first place. It’s a medium of exchange that greases the wheels. Intrinsically it has no actual use, unlike cheese, farm labor, or a boat. But if we invent a whole category of thing that itself has no intrinsic value, but we all agree to act as if it does and swap it for stuff, we can drastically speed up the rate at which our economy can function.

It’s easier to trade stuff if we have money. And it’s easier to go places and buy things without bringing your herd of sheep with you for bartering purposes. We started with money backed by gold, for which we also had decorative uses, but now we’re just using paper and agreeing to say it’s worth something because if we do create this whole extra commodity called money with its own kind of value, it makes it easier to do stuff that involves other people (and their skills and resources, etc.). Keep hold of that: money makes it easier to do stuff with other people.

And then we come to the internet, and the part of this post where I assert things about the speed of communication just like I usually do: The internet is changing everything. We’re more able to communicate with each other than ever before by a lot, and we’re able to talk to giant swathes of people, and without even the bother of calling them all on the phone. Also we’re more aware of our own relationships than we ever have been before, “Oh, LinkedIn says I know a guy who knows a guy who knows that guy who might give me a job. Interesting… I didn’t know I had an in there…”. And it’s easier to monitor and capitalize on those relationships to achieve goals. The internet, quite obviously, is making it easier to reach out to people and accomplish things with them. The internet makes it easier to do stuff with other people.

So, money and the internet both solve similar kinds of coordination problems. And the solutions to both kinds of problem contribute to the economic health of a society. But our ways of measuring “the economy” only include the money-problems, because up to this point the number of economically important coordination problems solved without money has been tiny. And so in order to understand economies it’s been pretty much sufficient to understand money – how it’s created, how fast it’s moving, how it’s valued, etc. And for now it might still be good enough, but the volume of economically important tasks that get completed without the use of money is only going to keep growing. And we need new ways to think of the economy that include those tasks.

I think that human connectivity is a good metric to start from, since the number and quality of connections or potential connections determine (at least partially) how well new collaborations can arise. To build a metric for this that you could actually use you’d have to look at the normal social interconnectedness of a given community (geographic or otherwise), at the prevalence of different communications technologies and methods, at the frequency of their use, and probably at some deeply difficult to construct wishy-washy measures of human fellow-feeling. Good luck constructing those.

Huh. So does that mean the internet is going to replace money?

No. But it does mean that some things that used to be accomplished best with money are going to be better accomplished with the internet. Well, honestly it’s possible to imagine a distant future where we have perfect Borg-like communication technology and money becomes useless, but it’s far enough off in post-singularity-land that I’m not going to worry about it at all.

The interesting questions to me are these:

I’ll leave you with an example. Take two small 19th century towns, both alike in dignity. But one of them’s Amish. And then someone’s barn burns down in each of the two towns. It’s easy to imagine the Amish town banding together and hastily rebuilding and getting the town back to full production. And the other town has family relationships and friends and some merchants to provide goods in exchange for money. The other town might get back on its feet quickly as well, but probably not as quickly. It’s the interconnectedness of the Amish town that converts into a higher economic value, with or without the use of money.

So what I’m saying is that the internet is making us all more Amish. Bring on the scrapple & beards!