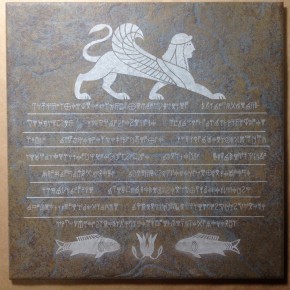 My brother, Dennis, was about to turn thirty. My partner, Victoria, and I, wanted to give him something monumental… like a monument. So we decided to list all his accomplishments on a victory stele. I love this thing so much.

Now, this is an old-fashioned thing to do. Very old-fashioned. Bronze Age Near East kind of old. You’d conquer something super far away, then put one up saying how far you’d conquered, and how awesome you are. Dennis’ accomplishments have more to do with technical theatre, raids in WoW, and teaching adults how to play Mario 3. When I read the text for his 30th birthday party, it was like a best man’s speech, but both very archaic and very modern.

Then I transliterated the text into Linear B, the alphabet of the Bronze Age Myceneans. These were the guys who would have fought the Trojan War.

Victory steles written in the Near East tended to be state monuments, and Linear B texts tended to be simple accounts of possessions. Neither was appropriate for a personal tribute. So I decided to write in the style of a Viking standing stone. They go more like this: “This stone was erected by Olaf to his father, Sven, mighty warrior, slain while off doing things”.

So the Stele has a Near Eastern origin, a Greek script, and a Norse prose style. And that lion looks pretty Assyrian to me, and the fish look kind of Egyptian. Hurray anachronism!

Now onto the design. Victoria Nece found a great Linear B font, and borrowed the horizontal lines from original linear B tablets – the lion, flowers, and fish just make it more awesome. Victoria also randomized the baseline of the text, which, when combined with the graininess of the stone itself makes the writing look much more hand-etched than, well, it actually is.

At the XOXO festival last year I met the guys from Etchpop in the Kickstarter booth. They’ve got a stack of floor tiles and a laser etcher that can read pdfs! So Victoria got to do her first bit of design to be etched in stone.

Everything about this project is either incredibly new or incredibly old, and I love that.

You can try to decipher the text yourself, but I’m not giving out the answers – for that you have to go ask Dennis. But if you do want to decipher it, do it fast. Dennis is a co-founder at Luminoso, a start-up filled with brilliant computational linguists. And once it’s up on his office wall, it’s only a matter of time.

Here are some more photos of the stele, courtesy of Etchpop, and a photo of Dennis grinning at the thing, courtesy of Victoria: